The European Network Against Racism (ENAR) is launching its Shadow Report on Afrophobia in Europe on 22 March 2016 in the European Parliament in Brussels.

The European Network Against Racism is launching its Shadow Report on Afrophobia in Europe. The 2014/2015 edition looks specifically at the situation of people of African descent/Black Europeans in the European Union.

Afrophobia refers to the specific form of racism that affect people of African descent and covers structural discrimination correlated to historically repressive structures of colonialism.

During this launch event we will present the findings from the Shadow Report and discuss how we can combat Afrophobia throughout the EU. It will gather Members of the European Parliament, EU officials, NGOs, representatives of the Fundamental Rights Agency, etc.

This is an invitation-only event. 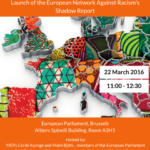